EVERYTHING YOU EVER WANTED TO KNOW ABOUT TATTOO REMOVAL… AND SHOULD ASK… BEFORE YOU GET A TATTOO!

With the recent surge in popularity of tattoos and the advancements in tattoo artistry, more and more people are opting to get tattooed.  People get tattoos for many reasons, sometimes after much thought and planning, at other times on the spur-of-the-moment.  The expectation for most is that they will love their tattoo and that they will love it forever.  Unfortunately, that is not always the case.

As the owner of a laser clinic that does a lot of laser tattoo removal I can tell you first hand that sometimes people end up hating their new tattoo from the moment it is completed.  I could tell you many stories of conversations I have had with people who are emotionally devastated when a tattoo does not turn out the way they envisioned it would.  Invariably they express shock and disappointment when they learn what is involved with getting rid of their unwanted ink.

There is a common misconception that tattoos are just as easy to get off as they are to get on.  Laser tattoo removal has certainly evolved, but even with advancements in tattoo removal technology this is far from the truth.  My goal in writing this article is to educate and shed a little light on the realities of tattoo removal and what it really takes to erase a mistake. 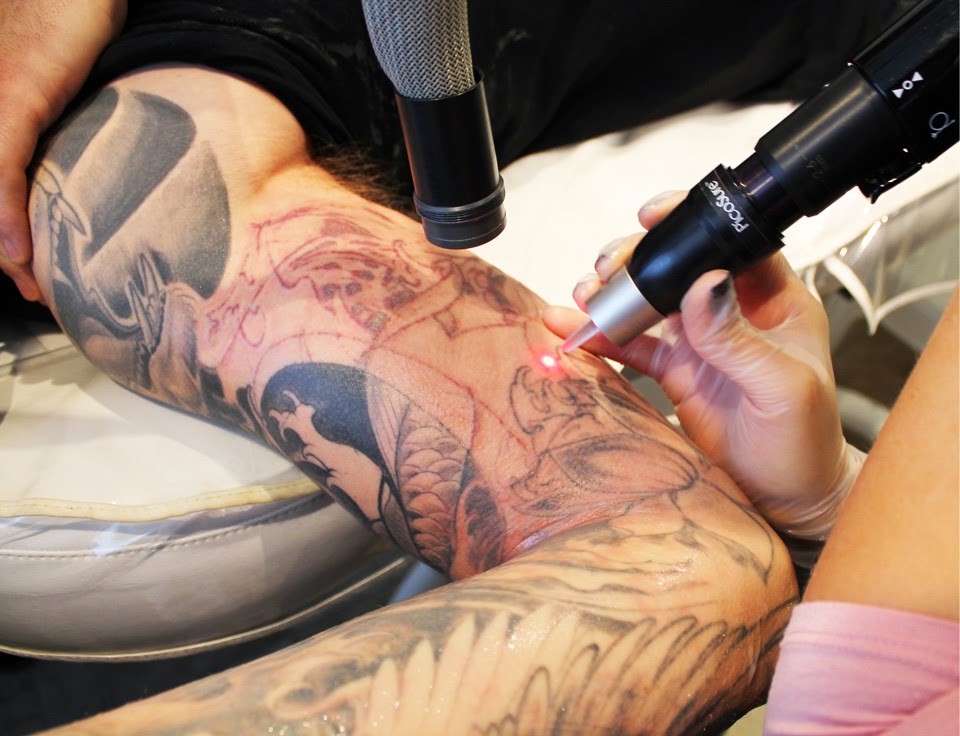 WHY DO PEOPLE GET TATTOOS REMOVED?

The reasons people get tattoos are innumerable but the focus of this article is not on why people get them on but the why’s and how’s of getting them off.  This is information people should be aware of before they commit to the permanency of a tattoo.

Some of the tattoos we remove are fresh and very beautiful.  Others are old and faded.  Many are less than attractive and were from the day they were applied.  There are many reasons why a person with an existing tattoo may want it removed.  The most common reasons we hear include:

WHAT YOU SHOULD KNOW ABOUT TATTOO REMOVAL…

Before the development of lasers that can remove tattoos, mechanical methods were the only option.  Methods ranged from attempting to scrape the ink off with dermabrasion or burn the ink off with acid, to surgery involving skin graphs.  Scarring was inevitable.  Laser Tattoo Removal makes tattoo removal possible without scarring.  Scarring is, however, still a risk.

Unfortunately not everybody is a candidate for laser tattoo removal.  You see, laser light is looking for a target.  In the case of tattoo removal the target, known as a chromophore, is pigment.  What this means is that people who have a lot of natural pigment in their skin cannot have the treatment.  Darker skin types are not candidates and I believe it is important that dark skinned people are made aware of this.  I can’t help but wonder if Mike Tyson would have had his face tattooed had he known ahead of time that laser tattoo removal was not an option for him.

Laser tattoo removal is suitable for fair to medium skin types.  As the amount of natural pigment in the skin increases, parameters for the treatment must be kept more conservative to reduce the risk of blistering.  Medium skin types such as Asians and Hispanics will require more treatments than fair skin types.

Tanned skin can be treated but sun exposure without SPF 30 or above is not advised for at least 10 days pre-treatment.  Tanned skin decreases the effectiveness of the laser and can increase the risk of post-treatment complications.  After the procedure the skin should not be exposed to the sun without SPF protection for a minimum of 4-6 weeks.  Exposing skin to the sun before it is fully healed can cause post-inflamatory hyperpigmentation that could be permanent.
The ink of older tattoos is easier to get off than freshly applied ink.  This is something you should consider before getting a cover-up that may not turn out the way you want.  Coverups will be much more difficult to get off if you don’t like the way it turns out.
Multi-coloured tattoos are more difficult to get off than tattoos of a single colour.  This comes back to the chromophore.  In laymen’s terms, each colour of ink requires a different laser to target it.  It takes a laser with a 1064 wavelength to see dark pigments, a 532 wavelength to see light pigments such as red, tan, purple, and orange.  A 650 wavelength is required to target green and a 585 wavelength is needed to remove sky blue.  White ink cannot be seen by any laser. Each treatment uses only one wavelength so what this means is that a tattoo of many colours will require a lot of treatments to get off.
Tattoo removal hurts more than getting the tattoo did.  Some clinics use numbing cream and/or apply cold air to the treatment site for comfort management.  Despite this, it still hurts.

HOW DOES LASER TATTOO REMOVAL WORK?

Lasers used for tattoo removal are called Q-Switches.  The difference between regular lasers and Q-switches is the speed that the energy is delivered.  Regular lasers fire the pulse in milliseconds (1/1000 of a second.)  Q-Switches fire the energy in Nano-seconds (1/10,000 of a second.)  A new Picosecond laser has recently been introduced that operates at speeds measured in trillionths of a second.  This breakthrough technology, known as Picosure, has opened up a whole new realm of possibilities for the use and effectiveness of lasers including faster clearance of tattoo ink.

The ink used in tattoos is usually made from minerals. To understand how tattoo removal works think of the ink as tiny “rocks.”  With multiple treatments lasers break down the rocks into smaller and smaller “pebbles.”   As the particles are reduced in size they can eventually be cleared from the body through circulation.

Nano-second lasers predominantly rely on photothermal action and deliver heat into the pigment and surrounding tissue.  The new pico-second laser uses pressure-wave technology that creates an intense mechanical impact that shatters the ink into tiny particles.  The “rocks” are not reduced to “pebbles,” but instead become “sand.”  These tiny ink particles are eliminated from the body much faster.  Tattoos are cleared in fewer treatments, with less fluence, and without injuring the surrounding skin.

HOW MANY TREATMENTS WILL IT TAKE?

The number of treatments required to get a tattoo off varies greatly.  Factors such as the age of the tattoo, whether it was applied by a professional or not, the depth and concentration of ink, the number of colours, the type of laser used and the technique used to perform the treatments.

Using conventional Q-switch laser, it will require a minimum of six treatments to remove a tattoo of a single colour and that is a best case scenario.  Multi-coloured tattoos will require an additional series of six or more treatments with each wavelength.  Do the math!  Four to six weeks of recovery time are required between treatments.
A new technique known as R20 has been developed for use with Q-switch lasers that can speed things up by doing up to four treatments with the same or different wavelength in a single treatment session.  The treatments are repeated with a 20 minute wait between passes.  This can speed up the clearance of the ink exponentially but each pass is generally charged for as a treatment so the cost is the same.
Picosure, the only pico-second laser in existence, can target all the ink in a single pass and has been clinically proven to clear ink in one-third the treatments required by Q-switches.  This, of course, if very good news!  Picosure can remove white ink with a risk of oxidation that would cause the ink to temporarily turn grey.  The bad news regarding Picosure is that it struggles with reds.  More treatments will be required for tattoos with red ink, perhaps with a 532 wavelength.
Multiple tattoo removal treatments, especially with the R20 Technique, can cause a build-up of scar tissue.  The ink may become impacted in scar tissue and become recalcitrant.  What this means is that it has quit responding to treatments and at this point it will never come off with the thermal mechanism of Q-switch treatments.  Fortunately the pressure-wave impact of Picosure can break up the scar tissue and eventually clear the ink.
The bottom line is that with Q-switch treatments it will require at least 6 treatments and upwards of 15 or 20 with complete clearance of ink an unlikelihood if the tattoo has multiple colours.  Picosure has been known to clear old faded ink in a single treatment but a series of 3 to 5 is a greater likelihood.  Additional treatments may be required for fresh tattoos, tattoos with a deep concentration of ink, or red ink.

WHAT TO EXPECT AFTER A TREATMENT?

After the treatment a salve called Aquaphor, which is much like Vaseline only thicker, will be applied and the treatment area will be bandaged. This will keep the area hydrated and sanitary.  It is not uncommon to develop blisters.  If a blister develops it should be treated and should resolve just as any blister does.  If is important to not let the skin peel off the blisters or scarring can develop and lead to hypopigmentation, white patches that are permanent. This risk is compounded with the multiple treatments required by Q-Switch treatments.  If blistering develops bandages and antibiotic salve should be kept on until the blisters resolve.  Otherwise the bandage may be removed after 24 hours. In either case the treatment area will probably be crusty for a few days and should be kept hydrated.  Healing time for both Q-Switch and Picosure treatments is similar.  The ink fades gradually over a period of weeks.

HOW MUCH DO TATTOO REMOVAL TREATMENTS COST?

Getting a tattoo off will definitely cost a lot more than getting it on!  Costs vary somewhat from clinic to clinic but generally the minimum cost for a small treatment is $100 and prices increase from there.  Most clinics will only charge for the area actually covered by ink and the maximum cost is $1,000 for a large tattoo not exceeding the size of a 8 1/2” time 11” sheet of paper.  Discounts are usually applied for a series of treatments.  The cost per treatment for Picosure is usually twice what you would pay for Q-Switch treatments but the overall cost is less due to the reduced number of treatments required.

AVOIDING THE HANGOVER OF TATTOO REGRET

Armed with the above information, my recommendation is to plan your tattoo anticipating that a day may come when you want to change your mind or change your art.  Choose your artist carefully and ask if a temporary mock-up of the tattoo is possible before the application of permanent ink. Make sure you like the way it looks and the way it makes you feel before you make the commitment.  Just as tattoo artistry has evolved so has technology that allows you to re-think your ink.

Roberta Segar is the owner and treatment director at
Take It Off Faster Tattoo Removal, a division of 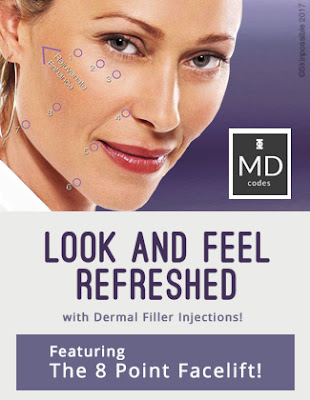 WHO should do YOUR Botox and Filler?